If you’re setting up or expanding a facility, or even if you’re just starting a new project, you may need a cleanroom. When you’re looking at what’s available it’s easy to get lost in the pros and cons of modular and traditional cleanrooms. So, we thought it would be a good idea to put together a quick comparison guide to get you started on the decision.

Whether you choose to have a modular cleanroom or traditional construction is going to come down to a number of factors. The size of your operation, time constraints, your budget and more all play a part. So, if you’re still not sure after reading this then just get in touch and speak to one of our experts and we’ll talk you through everything.

Scale of Modular and Traditional Cleanrooms

Generally, modular cleanrooms are great for any size. Due to the nature of construction, they can work for compact cleanroom- like the one we constructed for the EIRSAT-1 team– or larger cleanrooms. Since the cleanroom is made of a series of panels there is no upper limit to sizing beyond the physical constraints of where is it constructed.

Where modular cleanrooms really stand out though is with expansion. When you are working with a traditionally constructed cleanroom you will find it difficult to expand. It will require serious renovations, potentially new ducting and a lot of time, for which your cleanroom will be non-operational. However, with a modular cleanroom expansion it is as simple as slotting in new panels. This lets you reduce construction time and have an operational cleanroom significantly quicker.

We touched on this above but modular cleanrooms are much quicker to install. With traditionally constructed cleanrooms a build could potentially take months. Raw material needs to be sourced and the room built on site. All of this takes time. In the best case scenario that’s time where you could be operational and slowing down, your work. In the worst case scenario, you don’t meet time constraints.

When you choose to go with a modular construction this is less of a problem. Since they are made up of individual panels construction time is minimised. We simply need to bring the right number of panels and slot them together. Depending on the size of the build this could be done in just days.

No Need for HVAC in Modular Cleanrooms

One of the major benefits of using modular cleanrooms is that they don’t need a HVAC system to function. Traditional cleanroom constructions require HVAC systems, that means they pull outside air into the cleanroom through filters. They also filter air out of the cleanroom.

This does a great job at purifying the air, but it is also a time consuming and costly addition to a build. More importantly though, a complex system of filters, fans, ducting and pumps leaves more room for failures. Even if nothing goes wrong you will still need to routinely replace equipment to keep your cleanroom at optimum efficiency.

Modular cleanrooms on the other hand work by filtering air through a clean air module. This more compact and streamlined method means the air in the cleanroom is being recirculated instead of being pulled in from outside. CAM’s offers fewer points of failure than HVAC systems and significantly easier maintenance.

The materials used to create a traditional cleanroom shed over time. This decreases the air purity and can introduce pollutants into the clean room. This can be due to drywall, paint, etc. When using a modular cleanroom, they are typically constructed from high grade aluminum. As a result, modular cleanrooms will not shed keeping air purity higher without maintenance for longer.

All of this put together means that modular cleanrooms run at a much lower cost than traditional cleanrooms. This is true for the up-front costs of the cleanroom and of the money spent on labour. With less raw material and fewer tradesmen needed to set up your cleanroom from the beginning.

Even after construction has been completed modular cleanrooms can cycle air much more efficiently without an HVAC system. Lowering the energy costs required to keep the cleanroom operational.

When it comes to the time for preventative maintenance and emergency repairs, you’ll still get the benefits of lower costs. Whether it’s swapping the filter out of a clean air module or replacing a damaged panel it can all be done quickly and cheaply. 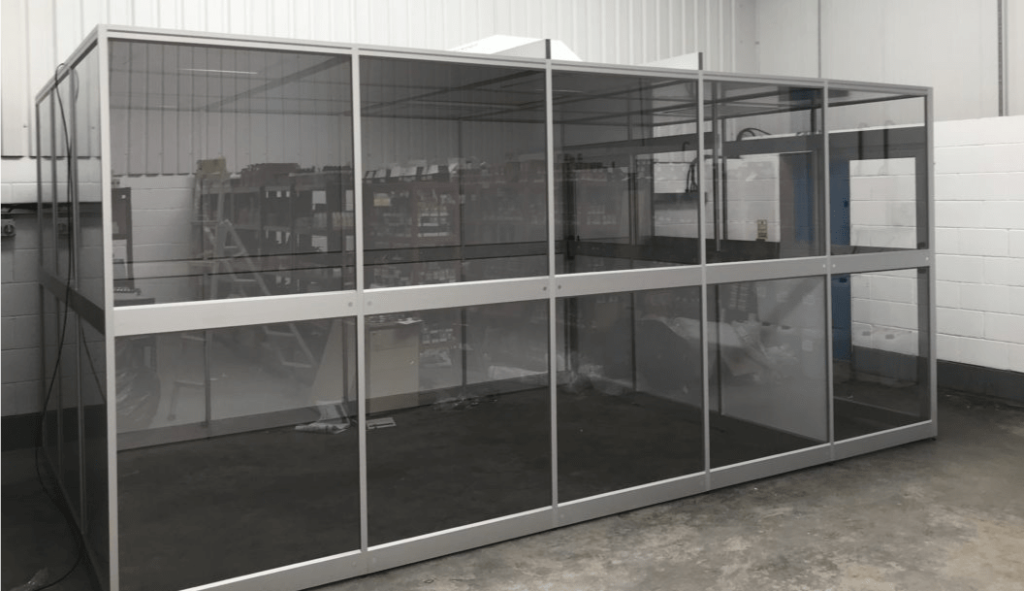 For most applications a modular cleanroom is a very good choice. This is why industries have been moving away from traditionally built cleanrooms and towards modular and pod based cleanrooms in recent years.

The benefits offered by modular designs are hard to beat, and as technology improves. Those improvements also become very easy to implement with modular designs.

Whether you’re planning for expansions, need construction completed quickly or just want to keep the budget down, modular cleanrooms are worth considering.

We are enormously proud to say that alongside our partners in Monmouth Scientific we were able to work on Ireland’s first ever satellite, the EIRSAT-1. This satellite has been developed by UCD with the support of ESA Education.

A Bit About EIRSAT-1

The project was initially chosen in 2017 by the ESA for their fly your satellite program. It passed its preliminary design review with both universities involved. By 2018 however the project has been designed and implemented by UCD with ESA’s support.

EIRSAT-1 will be carrying three experiments into orbit:

A miniaturized sensor for detecting gamma rays originating from cosmic phenomena. This module was developed by Sens Ltd. from Cork. It has the potential to improve gamma ray sensors by getting rid of the need for problematic components.

A novel in orbit protective oxide surface treatment module. This module was developed for the Solar Orbiter mission. This launch will allow it to be tested I orbit.

A new altitude control system which will allow a satellite to turn in any direction needed using Earth’s magnetic field.

Goals Of the Mission

As well as testing new satellite technology this mission is designed to boost the space sector in Ireland. Addressing skill shortages and inspiring future students to enter the STEM fields. 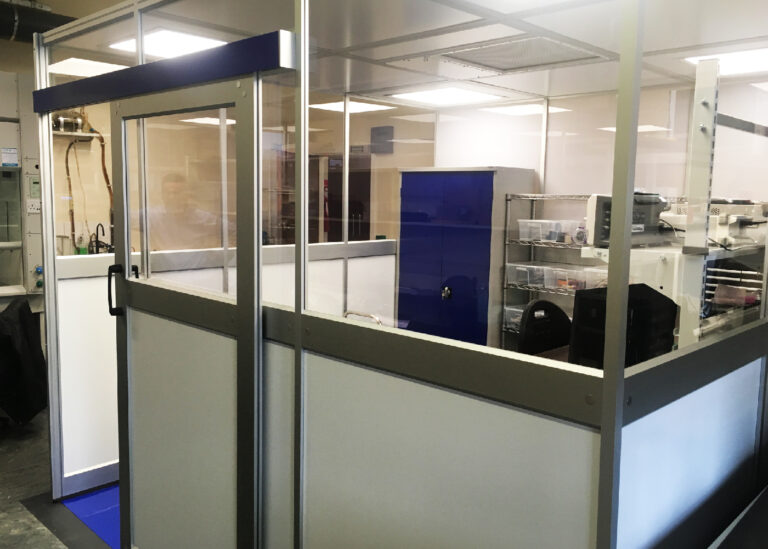 We found a modular cleanroom to be ideal for this project. Supplying enough space for all assembly and testing to be done while also keeping costs and construction time down.

The unit has a 9m² production area and is well lit with LED lighting. The doors are sliding doors with a soft closing feature.

The modular cleanroom is assembled on site and is highly adaptable, constructed of high-grade aluminum with durable polycarbonate windows.

As well as the cleanroom construction we added a CAM1000 Clean Air Module. This module ensures positive pressure and an ISO class 8 environment for the EIRSAT team to work in.

This unit features HEPA filters which filter the air as it enters the cleanroom (99.997% efficient at 0.3 microns). The unit then creates a positive pressure within the cleanroom.

In total this unit can handle an area of up to 1000m ³. Providing HEPA filtered air to the entire facility with 75 clean air changes an hour.

At NSP Expert Lab Solutions we are incredibly proud and happy to announce our partnership with Layton Technologies Limited. Together we will be working on the distribution and support of precision component cleaning equipment throughout all of Ireland

Our collaborations with our partner Layton Technologies, far exceed the expectations of our current clients, and we wish to bring this same level of service and expertise to future clients.

This exciting venture allows NSP to bring Layton solutions to a wider clientele in Ireland as well as servicing existing equipment.

We use cookies on our website to give you the most relevant experience by remembering your preferences and repeat visits. By clicking “Accept All”, you consent to the use of ALL the cookies. However, you may visit "Cookie Settings" to provide a controlled consent.
Cookie SettingsAccept All
Manage consent

This website uses cookies to improve your experience while you navigate through the website. Out of these, the cookies that are categorized as necessary are stored on your browser as they are essential for the working of basic functionalities of the website. We also use third-party cookies that help us analyze and understand how you use this website. These cookies will be stored in your browser only with your consent. You also have the option to opt-out of these cookies. But opting out of some of these cookies may affect your browsing experience.
Necessary Always Enabled
Necessary cookies are absolutely essential for the website to function properly. These cookies ensure basic functionalities and security features of the website, anonymously.
Functional
Functional cookies help to perform certain functionalities like sharing the content of the website on social media platforms, collect feedbacks, and other third-party features.
Performance
Performance cookies are used to understand and analyze the key performance indexes of the website which helps in delivering a better user experience for the visitors.
Analytics
Analytical cookies are used to understand how visitors interact with the website. These cookies help provide information on metrics the number of visitors, bounce rate, traffic source, etc.
Advertisement
Advertisement cookies are used to provide visitors with relevant ads and marketing campaigns. These cookies track visitors across websites and collect information to provide customized ads.
Others
Other uncategorized cookies are those that are being analyzed and have not been classified into a category as yet.
SAVE & ACCEPT